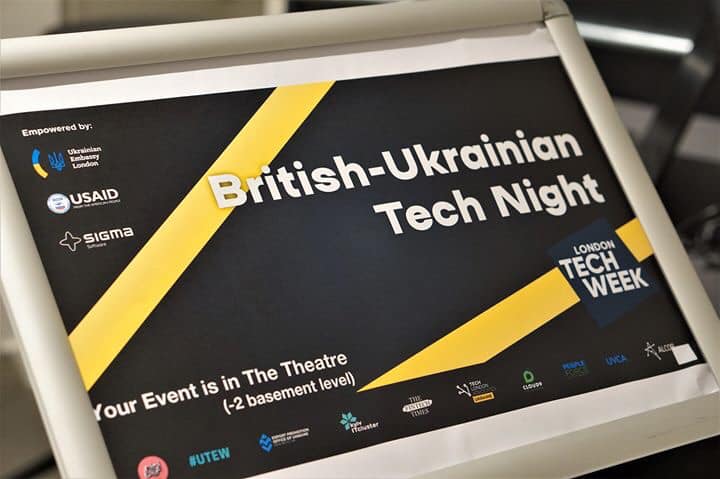 We are excited about British-Ukrainian Tech Night, which took place recently within London Tech Week and was co-organizaed by us and our partners: the Embassy of Ukraine to the UK, Export Promotion Office, UTEW Tech Tribe, supported by Sigma Software, media-supported by MinibarLabs community, LondonTech Advocates, UVCA - Ukrainian Venture Capital and Private Equity Association, and powered by the USAID «Competitive Economy of Ukraine» Program.

More than 200 people attended the event, the majority of them being British entrepreneurs. There is definitely a keen interest in Ukrainian companies on the British market.

The potential of Ukraine was presented at the event by Daniel Bilak of UkraineInvest - Ukraine Investment Promotion Office and Russ Shaw, Tech London Advocates - Ukraine and co-founder of London Tech Week.

The event ended with 2 hours of networking, where all the participants got a chance to learn more about each other and cooperation prospects, and some even signed signed contracts right at the venue.

We are happy to take part in international promotion of Ukraine!

The following two days a national booth of Ukraine was active at the TechXLR8 exhibition within London Tech Week – for the first time on such a grand scale, and we were glad to be a part of making that goal come true, but that is what our next post is about! Stay tuned!