Our biggest event this year! 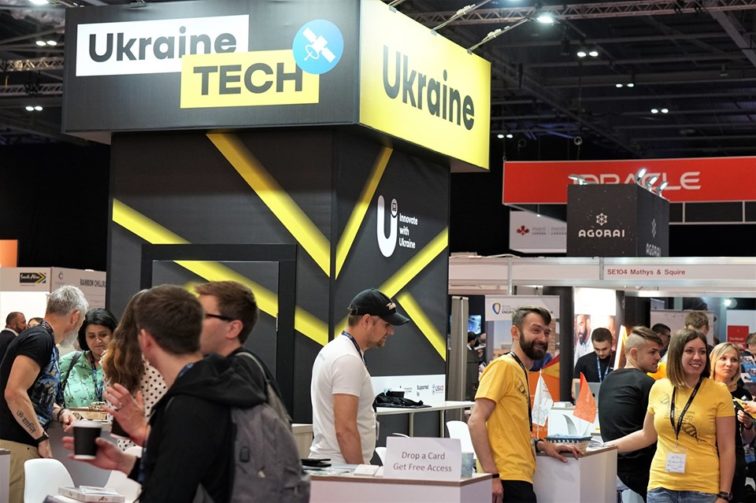 The Ukrainian Days at London Tech Week have just ended, and we can say that Kyiv IT Cluster had an honor of organizing those together with partners: the Embassy of Ukraine to the UK, Export Promotion Office Of Ukraine and Ukrainians at Tech Events of the World community, with support of the USAID Competitive Economy Program.

The Ukrainians did organize booths at international exhibitions before, for instance, UVCA has been bringing Ukrainian startups to the CES exhibition in LA for 3 now, and for 1 year – to Wearable Technology Show in London. That is where the Ukraine Now – Ukraine Tech logo and the yellow-and-black color scheme were first used.

But the bigger dream – to create an actual national, large-scale booth to represent a wider spectrum of companies – was realized just now.

The reason this story is unique is also because it is the first time, when the State (The Embassy of Ukraine to the UK and Export Promotion Office Of Ukraine), public organizations and business communities (Kyiv IT Cluster and UTEW), supported by businesses (the booth participants Sigma Software, Grammarly, Competera, AllStarsIT Ukraine, UGears, RAWR, TechMagic, Sannacode and Unicsoft) and by a donor (the USAID Competitive Economy Program), did such a large-scale project together.

An additional initiative – the meetup, which was organized jointly with the British community MinibarLabs, – was also supported by Sigma Software, and London Tech Advocates and UVCA acted as media partners.

Such global synergy allowed all the entities involved in the process to complement each other’s efforts and to create a success story together:

-       The Embassy initiated all the communications by spreading information about the possibility to take part in London Tech Week, and later on – by assisting in organization of the meetup;

-       The Export Promotion Office did something phenomenal – using their vast experience in similar projects, they assisted greatly in communication with our donor, CEP Ukraine by USAID, and with the construciton team, who brought our ideas to life. They are the reason our booth was one of the most eye-catching at the exhibition;

-       Kyiv IT Cluster carried out the communication with the London Tech Week organizers and worked directly with the donor to ensure a significant part of funding for the event. We were also responsible for selecting participants and facilitating communication between all the entities involved in the process;

-       UTEW assisted in selection of participants for the booth and managed all the marketing processes, as well as engagement of local (British) partners. Together with the Embassy, they made the meetup a great success.

The concept of a synergy between the State and the businesses originates from the Export Strategy for the IT Sector, which was initiated by the Ministry of Economic Development and Trade of Ukraine, supported by GIZ and implemented according to the ITC methodology, active participants of which are Kyiv IT Cluster and the Export Promotion Office of Ukraine. This Strategy is the basis for funding plans for donors, and it contains Recommendations on National Booths, which we happily began to implement.

So, the results in numbers:

The Ukraine Booth was located in the main alley and attracted a lot of attention.

Kyiv IT Cluster took this opportunity to showcase the Ukrainian IT ecosystem and to support our partner clusters by handing out brochures with information on the ecosystem in general and on the key tech hubs – Kyiv, Kharkiv, Lviv and Dnipro.

The results for our participant companies are yet to be seen in a couple of months, but even now they are all unanimous in saying that the event was incredibly useful and allowed them to make numerous promising contacts. We are grateful to the companies for their participation and we wish them a successful development of the newly established connections!

We hope that this experience will be the first one among many to come, and that our country will be represented at all the major tech events worldwide. We, at Kyiv IT Cluster, will be happy to join in the efforts for that.

We are grateful to everyone who became a part of achieving this goal and making this dream come true.